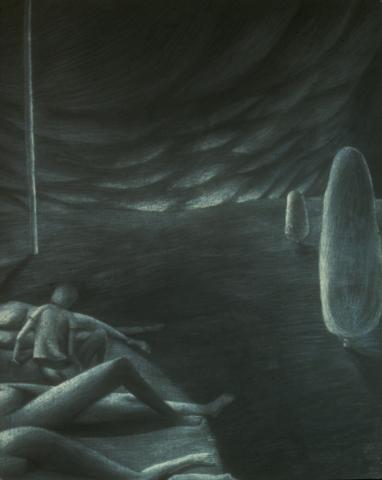 While attending undergraduate school at Syracuse University I took several film classes including one exploring French New Wave film. A film that struck me particularly was Alan Resnais' "Last Year at Marienbad." It's a very dense, slow film with landscapes inpired by surrealist paintings. The film also plays with time. "Piecer" embodies many of these qualities. The female figure repeats, she's shown rolling over, captured in different snippets of time. The male figure is static anchoring, inhabiting a particular time.

Like the rest of the "suburbia" series the imagery in "piecer" is paired down and mundain. The landscape is populated with trimmed bushes, a lawn, and a metal pole. These objects exist everywhere in the suburban landscape but placed in the picture's barren atmosphere they gain a hidden energy. In many ways this drawing and the others from this series anticipate David Lynch's "Blue Velvet" which came out three years after. Having switched from abstract to narrative painting I had made a conscious decision to draw imagery from what I knew. At that point in my life all I really knew of the world was from growing up in a mid-century suburban neighborhood and adolescent angst.